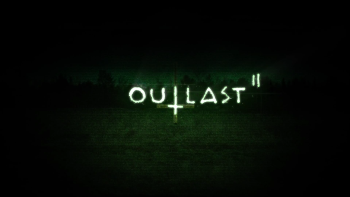 Outlast II is the sequel to Outlast and Outlast: Whistleblower, and is the third game in the Outlast series.

"No conflict is ever black and white. But once the dust has settled, the victors get to decide who was right and who was wrong. Who is good and who is evil. Human nature pushes us to extremes of violence and depravity, which we then justify by divine inspiration and a promise of paradise to come. Horror rises from desperation and blind faith. OUTLAST 2 will test your faith, pushing players to a place where going mad is the only sane thing to do."

Outlast 2 (in publication and media represented as "Outlast II") is the sequel to Outlast and Outlast: Whistleblower currently in development by Red Barrels Games. It is an indirect sequel, and may or may not be related to the events of the first game directly. It will be released in Fal of 2016 for PC, PS4, and Xbox One.

"You are Blake Langermann, a cameraman working with your wife, Lynn. The two of you are investigative journalists willing to take risks and dig deep to uncover the stories no one else will dare touch. You're following the trail of clues that started with the seemingly impossible murder of the pregnant woman known only as Jane Doe. The investigation has lead you miles into the Arizona desert, to a darkness so deep that no one could shed light upon it, and a corruption so profound that going mad may be the only sane thing to do." ― Outlast II Demo Screen

Outlast II will take place in the same general universe as Outlast, and is placed some time after the events of the Mount Massive Asylum slaughter. While the Murkoff Corporation will make an appearance, it is unknown whether or not The Walrider will be related to this new story. It has been theorized that the game's story will concern another of the Murkoff Corporation's experiments. The plot of Outlast II takes place in a secluded village in the desolate canyons of Arizona, where Blake Langermann, a cameraman and journalist, along with his wife Lynn Langermann, are investigating the impossible murder of an unknown Jane Doe. The woman was found eight months pregnant and on the side of the road, and was taken into a hospital. While there, she committed suicide.

After taking a helicopter into the remote village and crash landing, Blake blacks out, waking up to find Lynn missing. Blake soon discovers the village is in fact a village of cultists who believe that the End Times of Revelations is upon them. He decides to rescue Lynn and escape from the village.

The game is based on the same Unreal Engine 3 as the first two games, but is modified heavily. Developers had said this modification allows them to reuse previous assets, including animations, character models, meshes, and more. The same mechanics from the first two games have been included in this game, though new locations and mechanics have been added. The Camcorder HUD has been slightly changed, but the night vision mechanic returns in its original form. Both still require batteries. New hiding mechanics, including hiding in water pools, empty barrels, closets, etc., have been included in the new game.

At Pax East 2016, Philippe Morin, the co-founder of Red Barrells Games, revealed that a comic book is being developed. The plot of this comic book is designed to bridge the storylines between Outlast and the Outlast: Whistleblower DLC with the new game.